I Once Ate Lunch with Edward Albee and other Monday Confessions

Why am I writing some random confessions? I'm not sure except that I hit a stopping point on the WIP but I didn't want to stop writing and my brain is floundering about as it does on a Monday when once again I'm on a mostly self-imposed deadline (okay, my agent has some control over it, too) and so--some things about me that I am sure most of you don't know.


1. Once, I ate lunch with playwright Edward Albee. Yes, THAT Edward Albee, author of Who's Afraid of Virginia Wolff and Zoo Story and A Delicate Balance and a bunch of other amazing plays. He used to teach playwriting at University of Houston one semester a year or so, and he was buds with the late, great, theater professor Sidney Berger. And my friend Wanda and I were teaching high school English and Edward Albee was also directing one of his plays at the Alley Theater. And the Alley Theater often has a program for teachers combined with a Saturday matinee. And so… we went.

It did not occur to me that somehow Wanda and I would end up eating lasagna and garlic bread on paper plates at a table for four which consisted of Edward Albee, Sidney Berger, Wanda and me. And yet, we did. I think Wanda told them about North Carolina, where she is from. Possibly I said the lasagna is yummy. I mean really, what does one say in these moments? Albee drank a Diet Coke. (These are the kinds of details I remember.) Had I already been published, I might have had something else to say, but probably not because that's how lame I am.

Once in a while when life gets dull, I remind Wanda that once we ate lasagna with EDWARD ALBEE. On paper plates. With Diet Coke.

2. I shook hands once with the late actor Jimmy Stewart. (He was alive at the time.) He was very kind and very tall and very tan.

3. The main thing I remember about meeting former President Jimmy Carter and wife Rosalynn was that they were both very petite. (at least at the time)

4. I also once met actor Cary Grant. (He was also alive at the time) He was also very tall and very kind and very tanned.

Back at the blog after a bit of a break to finish the final draft of next year's IT WASN'T ALWAYS LIKE THIS. Something about that last push with a book when I'm struggling to get all the words right that just makes me feel like the only other things I have to say are "Hey! Did you know I'm still revising this book? Yes. You heard that right! Still. Been writing the thing for like a year now, on and off. I think it's done. Maybe. I hope."

But here I am and in time for a quick five things.

1. Absolutely in love with Miss Fisher's Murder Mysteries. It's an Aussie show and it's been on PBS but I've discovered it on Netflix, thanks to the rec of my favorite pop culture know it all, the very talented Jennifer Mathieu. 1920s. Woman private eye named Phryne Fisher. Melbourne, Australia. And oh, inspector Jack Robinson. Plus outfits that make me want to scour every vintage store in the world. Plus Dot and Hugh Collins and Mr. Butler the Butler and a bunch of murders cleverly solved. Plus airplanes and fast gorgeous cars and a bunch of other stuff.

2. It has finally stopped raining here in Houston. So now it's 97 every day. But I am finally using that pool pass.

3. The tomatoes spit out 6 last ripe ones before the plant gave up. Too much rain washing all the nutrients out of the soil, I think. But seriously, what do I know? Going to build a garden box next and some time next month I shall plant stuff for the fall and we shall see if I am a #patiofarmer after all.

5. Had a grand quick trip to Chicago and a lovely event at Book Stall with Ted Goeglein and if you are reading this and you came and helped fill the room, thank you! Book Stall is a wonderful indie in the Northshore suburb of Winnetka and if you are in Chicago, you must go buy a book there. Stopped on the way at a small indie grocery to buy some Lifesavers because CANDY, and saw a display of my favorite childhood soda pop, which is for some reason never sold anywhere but the Midwest. It's called Green River. And it is VERY GREEN. It looks like this: 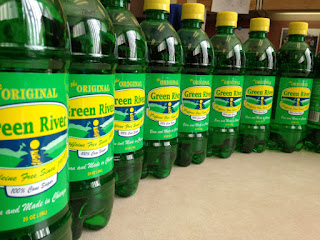 Posted by Joy Preble at 7:57 AM No comments: