Here's some stuff I'm happily obsessed with this week:

1. They're opening a Shake Shack a block from the recently opened Hopdoddy. So yeah, Rice Village now looks too tidy -- like a fancy burger and giant Starbucks theme park. But think of the coffee milkshakes I can consume...

2. LOVE SUGAR MAGIC by Anna Meriano is delightful and sweet and a little edgy, too, in a gentler middle school way. Read it. You're welcome.

(and a topic for another day: My anecdotal observation while ordering books for the store is that there are a lot of VERY HEAVY and SAD middle grade novels coming out this season and into the fall. Wondering if this is a good thing. It might be a 'hey this book will be nominated for an award' thing. But that does not mean that I'll be pushing those books on every pleasure reader who walks in to browse.)

3. Rodeo is almost here. We don't go every year, but I think we'll head over this year. Mutton busting. Fried food, the weirder the better. (one year I had deep friend Kool Aid.) Giant corn dogs. Thousands of people in cowboy boots. Closer proximity to livestock than normal.

4. Kami Garcia's new YA-- BROKEN BEAUTIFUL HEARTS. It's a solid and wonderful romance with a very serious center about abusive relationships. And I'm honored to be taking her on school visits through the store.

5. Finally watched CREED. Michael B. Johnson, you are amazing. And Sly Stallone-- it's nice to see you take on the role of trainer. All told, a decent, solid movie.

6. Finishing this book I'm writing. Finally. I cannot wait to talk about it. Or to press send.
Posted by Joy Preble at 10:21 AM No comments:

1. The Netflix reboot of ONE DAY AT A TIME. Just raced through Season 2 and if you haven't found this series, you absolutely need to rectify that RIGHT NOW! It's a Cuban-American family now, with an army vet single mom Lydia, a just-coming out in Season 1 gay and politically aware daughter Elena, a popular and self-centered but loving son and grandma living with them played by Rita Moreno.  Schneider's been re-imagned as not only the super of the building but its owner, the former addict son of wealthy Canadians. I'll let these articles from The Atlantic and The New York Times speak the rest: https://www.theatlantic.com/entertainment/archive/2017/01/one-day-at-a-time-is-a-sitcom-that-is-also-a-civics-lesson/512867/

Watch it. Let me know what you think. Personally, I'm in love with how well it makes me both laugh and nod my head and think.

2. Entertaining again. I've been slacking. Come over and we'll order Chinese or pizza has been about it. Last weekend I did a legit dinner party (just for 4 but hey, it's a start) and made Cioppino  - which is this San Francisco fisherman's stew with clams and mussels and fish and shrimp and scallops and more and I managed to make it taste great! Or at least good enough.

3. Seinfeld's Comedians in Cars Getting Coffee. Okay not all the eps are as interesting to me. And I truly wish he'd included more women in the mix. But I'm glad Netflix has all of it up and so far Trevor Noah talking about apartheid and Sarah Jessica Parker in the station wagon with the wood siding have been my favorites. 15 minutes per episode, so you can watch it while making dinner. (or maybe that's just me) And some fascinating tidbits of conversation, some really deep, snuck in there in between the coffee and the driving and the munching on breakfast items.

4. My excitement that I will be presenting a workshop called  Advice from a Bookseller at the Austin SCBWI conference this spring. Like I'm really really excited!

5. The food at LOCAL FOODS in Rice Village here in Houston. It is pricey but delicious and on the rare occasions I actually take myself out to lunch, it is nice to just sit in a corner and eat yummy food and watch people come and go. Which leads me to my on-going life observation about how many people refuse to eat out alone or go to the movies alone. You are missing out, I say. Okay, it's fun to chat with friends over lunch or to a movie with someone. But if they're not available, I say eat the damn lunch and watch the damn movie. You are capable. Trust me. You are welcome.

The Thing About February

Hello little month. I'll tell you a secret. I'm not a fan. You are a short month. A busy month. You've got the emotional tease of Valentine's Day and the weirdness of Ground Hog Day and honestly, February, you suck. Does anyone even say your name correctly? Feb-Ru-Ary.  You're the Wed-Nes-Day of months, Feb.

My reaction to February is always: "Where the hell did January go?"
Sometimes I follow that thought up with one about the wacky break up I had with a boyfriend in college, the day after Valentine's Day.

He'd sent me a huge Valentine's card. (we were at different colleges, having dragged this whole thing on from what should definitely been a rebound boyfriend/summer romance only but somehow kept going). But he'd been acting weird and I should have known-- in fact, should have noticed that I wasn't into this whole thing anymore either-- but it was February. And my university was on the quarter system which meant we were in the thick of Winter Quarter, like six weeks (maybe it was eight?) of doing 5 classes and the equivalent of a semester's of work all while it was below zero outside and your breath froze to your scarf walking to class. So seriously. It was enough to do, trudging through the snow.

Anyway. February 15, he called and we broke up and in that way of things you don't do first even though you should have, I was still surprised.

Right now as I type this, the power company is lining up the same six trucks they've had out here all week, changing out underground power cables which somehow involves both digging on the side of our house with something called a DitchWitch and also shooting giant spools of cable underneath my yard, occasionally causing giant mud puddles (which look like melted clay mixed with dog poop and glue) to bloom on my lawn.  Yesterday's Super Blood Blue Moon was a slight distraction. The accountant says I need to get the tax worksheets done soon.

And this novel I keep trying to finish is not always being cooperative.

But!
I'm reading the ARC of a lovely love story, FROM TWINKLE WITH LOVE, the sophomore YA from Sanhya Menon, who wrote WHEN DIMPLE AND RISHI  and it's sweet and fun and I fully anticipate a happy ending. Put it on your TBR list. Quick. Before Feb Ru Ary races by. 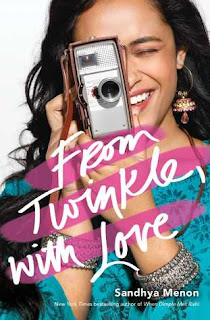 Posted by Joy Preble at 7:21 AM No comments: