Summer has been brutal here in Texas. It has been between 95 and 107 since May here in Houston. Worse in Austin and Dallas. A few weeks ago we were at the Rangers game in Dallas and it was still 103 degrees at 10PM. That is HOT. We're on mandatory water restrictions. And it just won't rain... although they say some is coming this weekend. Last Wednesday night, we actually got a brief storm while I was at critique group at the library. No joke - everyone rushed to the windows and cheered when it started to pour.

So I'm happy to see September roll in. September brings everything I love - fall (less thrilling here in Houston than in Chicago where I grew up, but...), high school football, cooler weather, new clothes in the stores, Halloween, Thanksgiving, my birthday, a new tv season (Vampire Diaries looks very promising, as do a number of other fantasy shows including Grimm)... and yes, the pumpkin spice lattes at Sbux.

Publishing revs up again after Labor Day, so that's fun, too. Actually, pretty much everyone I work with has been at their desks lately, but there will be a little break here starting tomorrow until Tuesday, I'd imagine. And then - bam!

I'll be telling you what I've been working on! I'll be doing edits for Again and Again (Dreaming Anastasia 3). I'll be pitching some new projects. *crosses fingers*

And Comic Con!!! In November, I'm headed to Austin Comic Con with PJ Hoover, Jessica Lee Anderson, Tracy Wolff, Kari Anne Roy, Jason Henderson, Mari Mancusi and Madeline Smoot. We are the Writing Ninjas of Texas. We have a booth! We will be meeting and greeting and selling books and merchandise and an e-sampler of our collective work. And I will be wearing my rusalka costume! A rusalka is a malevolent Russian mermaid and a particular rusalka plays a crucial role in HAUNTED (out now) and in AGAIN and AGAIN (out next year)

Plus October brings the Crossroads Blog Tour 2! More on that soon.

Fall will also see the introduction of our new Houston YA writers collective, the YAHOU's!! You can already follow us on Twitter ( @YAHous) and our FB page will be up soon. All I'll say in this post, but I am just thrilled about our group, and I'll be posting more about it soon.

What are you looking forward to this fall? Comment and let me know!

Sneaking in the reading where I can these days. Here's what's on my nightstand, in my Kindle, or sitting around the house and getting read by me:

The Magicians by Lev Grossman -- really liking the fantasy of this one; Narnia-esque but not really. And I'm not sure where it's going...

Love Story -- by fellow YA Outside the Lines blogger Jenn Echols --girl writes about boy; boy writes about girl... and inheritance, a stable boy, a creative writing class... I adore Echols' writing. Romantic, funny, sexy - everything I love in a story.

A Place of Yes - by reality star Bethenney Frankel. Mock if you like, but I have really enjoyed this book. I'm a Bethenney fan, and yes, I hope that she and Jason and Brynn and Cookie the dog live happily ever after forever and ever. B is funny and snarky and neurotic. Is it any wonder that I relate? Or as my husband commented: "Of course you like her. She's afraid of nothing and everything at the same time. Just like you." Okay then.

So what's on your nightstand?

Posted by Joy Preble at 8:06 PM No comments:

Both had interesting answers on sort of opposite ends of the spectrum to the question, "In matters of life, love, making a living and maintaining a writing career - can you have it all? Or is that just a pleasant fantasy? And if you're a woman, is it harder? "

Congrats Michelle and Pam! Please email me at joypreble at gmail dot com and let me know where to send your prizes!

Some thought provoking responses over all. Some of you are happy with your lot; some think that there will always be some sacrifice; some feel women do have it tougher trying to keep everything balanced. Some of you just wanted a t shirt! (that's cool, too. they're wonderful shirts!!)

Me? I agree with my buddy Samantha Vamos - who didn't win, but did comment that we do get it all - just not all at once, which I thought was a fine and wise response that is closest to my own experience. I have enjoyed teaching, motherhood, love, writing, publishing and lots of things in between. But I cannot put exactly the same amount of energy into every one of these at the same time, no matter how much I try. Something always has to be set aside, and that gets tricky.... but there are only so many hours in the day. I am not teaching this year (at least not full time) because teaching six classes took more of my creative energy than I could safely give and still have enough left to write the way I wanted to. Now I have to discover - what's my happy medium? 2 classes? 1? 3? None? I'll let you know when I figure it out.

Posted by Joy Preble at 9:50 PM No comments:

It's Friday. And a Question and giveaway 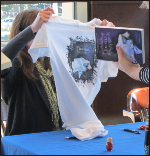 And oh crap, now that song is back in my head.

But Friday it is. And writing I am. (hello, Yoda, how did you wander into my speech pattern?)

And pondering a question that sort of kind of came up when (see previous post) agent Jen and my tallest friend Lauren and I were sipping wine and eating delicious cheese at Artisan Cheese Gallery in Studio City and generally enjoying life.

In matters of life, love, making a living and maintaining a writing career - can you have it all? Or is that just a pleasant fantasy? And if you're a woman (yes, I know it's 2011, but I think the question that takes us back at least as far as Virginia Woolf's A Room of One's Own still applies. I just do.) - is it harder?

Would love to hear from you.

In fact, if you comment, I'll put you in the contest hat and give away a Haunted t shirt to one lucky winner!

Email ThisBlogThis!Share to TwitterShare to FacebookShare to Pinterest
Labels: Artisan Cheese Gallery, Haunted, having it all, Jen Rofe, Lauren Strasnick 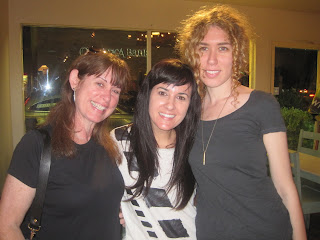 Back from a long weekend in LA - hanging with family and friends. Out of the Texas heat, beach time at Malibu, and some quality play time with intrepid agent Jen Rofe and the very tall and very delightful Lauren Strasnick.

And today - my very first day writing full time! So far it's been good. I'll let you know how it goes. For the first time since I kindergarten (I have a late birthday so I wasn't even five yet!) I did not go to school today. I am not sitting at inservice. I will not be there tomorrow. Instead I am writing and working and plotting and planning and just emailed Kay at Sourcebooks without having to sneak it in while no one was looking.

Doing some part time gigs to make up the slack... Gonna see how it goes for a year.

And so I must get back to it! The WIP is calling me and I must obey. Soon my Again and Again edits will arrive so I'm working on something new while I can. I may even be able to tell you about it soon... ooooh...

Why we do what we do 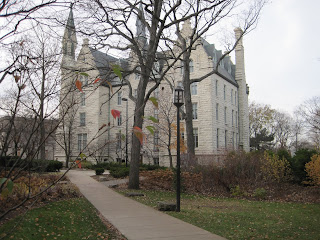 Have just discovered the wonder that is Kindle Singles, thanks to my friend Sharon N. I've been a fan of Plum Sykes since I read her articles in Vogue (whose fall fashion edition is always the weight of a small toddler). So I'm tearing through her essay entitled, 'Oxford Girl' I think it's an essay - on the Kindle it's sometimes hard to tell.

Besides letting us into the secrets of the posh but not actually monied, Sykes describes the reasons she was so determined to attend Oxford - none of which really had much to do with academics.

I could relate. When it came time for college, I applied all over the great state of Illinois, and in fact had been accepted to the occupational therapy program at the Chicago campus of U of I. And then I spent the day at Northwestern in Evanston. The sun was shining off the lake and the buildings were covered with ivy and students were zipping across campus on their bikes. A really cute guy smiled at me as he hurried into University Hall - which was this funky white building from the 1800's with a clock tower that I loved (so much that I killed Professor Olensky there in book one). There was the amazing Deering Library that looked like something out of Hogwarts (not that I knew that then since it was the pre HP days). Plus everyone looked smart. In short - it looked suspiciously like the movie version of college. Just like that, I was an English major at NU. A choice I made for all the wrong reasons that ended up changing my life for all the right reasons.

So what choices have you made for goofy reasons? Anyone want to fess up?
Posted by Joy Preble at 11:46 AM 1 comment: