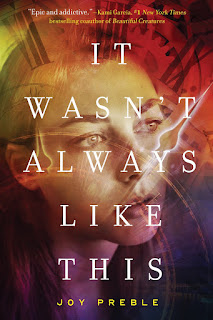 It’s here! It’s here!
Welcome to the world, IT WASN’T ALWAYS LIKE THIS !

What a journey this book has been. It began as the barest of ideas discussed between my editor and me back in late fall of 2013—an elevator pitch and not much more. Tuck Everlasting meets Veronica Mars. A girl and boy who become accidentally immortal and lose each other in the aftermath and somehow in searching for him, the girl becomes an immortal and jaded private eye. I liked the idea from that very first phone conversation. But liking an idea and executing it on the page are two different things.

So I began pondering immortality. I mean who doesn’t, right? Myths and legends and stories and beauty ads and science and theological musings. It became quickly apparent that in one way or another we all want to live forever.  Even if we say we don’t. So what would it be like for this couple, I wondered, if they really did? If they weren’t magical in any other particular way but not aging? What would that really be like? Would they love it? Hate it? Would it get tedious? Would it be scary? Would it be the best thing ever? And if they were separated, how long would they search for each other? How long do you stay in love with someone? How do you cope if you’re truly stuck at seventeen? And how do I write a multi-point of view thriller/romance/mystery that spans 100  years and a large number of places? Do I tell it straight through? (Nope.) Do I find myself writing a non-linear novel that slowly builds characters past and present? (Yup.) How do I let my readers simultaneously get to know the innocent, sweet Emma of the past and the world-weary, jaded Emma of the present? And what about Charlie? And what about the bad guys? And the sort-of bad guys? And the legend of the Fountain of Youth? How would I get the fairy tale tone I thought I needed?

I wrote and wrote, draft after draft.
Emma became Emma.
Charlie became Charlie.
Detective Pete Mondragon evolved from an offstage phone call to a crucial secondary character.
And so it went.

Today IT WASN’T ALWAYS LIKE THIS becomes yours. I hope you love it as much as I do.

Accidental immortality. Star-crossed romance. Murder. And a forever-seventeen-year-old girl who refused to give up on anything, especially not on the search for the boy she loves.

"With its exciting plot and well-wrought characters, this novel emerges as a suspenseful treat with a gooey romantic center. The narrative alternates between scenes of Emma’s distant past with Charlie and her murder-mystery present, building to a final showdown that is both surprising and satisfying." —The Bulletin of the Center for Children's Books

Posted by Joy Preble at 1:00 AM No comments:

Email ThisBlogThis!Share to TwitterShare to FacebookShare to Pinterest
Labels: It Wasn't Always Like This, Soho Press, Soho Teen

So much going on. 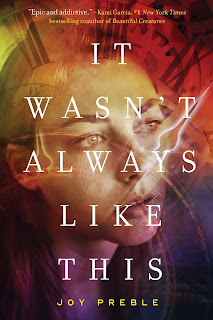 IT WASN'T ALWAYS LIKE THIS is coming in less than a week on 5/17 from Soho Teen/Soho Press! Tuck Everlasting meets Veronica Mars. Accidental immortality. Star-crossed romance. And most of all a twisty, non-linear murder mystery with a hard-boiled forever seventeen year old PI named Emma O'Neill.

I'm very proud of this book. I hope you all love it as much as I do.
It's that weird time right before a book arrives. We authors wonder if anyone will read. If anyone will talk about it. So many wonderful books that we always hope ours won't just slip between the cracks. Always so grateful that so many readers and authors and booksellers and bloggers support me with such full hearts!

And so it goes in the writing world.

Working on something new right now. Been working on it. Excited about that one, too!

And other cool, unexpected things that I won't talk about quite yet.

But mostly it's been IWALT release planning these past few weeks.

Tuesday May 17:
Release Day!
Launch Party at Murder by the Book in Houston
6:30 PM
http://www.murderbooks.com/event/preble

Sunday May 22
In Conversation with Samantha Mabry, moderated by Mandy Curtis of FYA
at Book People, Austin TX
1 PM
http://www.bookpeople.com/event/samantha-mabry-joy-preble

More to come, including panels at Comicpalooza and the Barnes and Noble Teen Weekend, both in Houston in June!