Saturday - purchase ginormous box of Cascade dishwashing soap cause it's on sale.

Sunday, 9:30 AM - wrench lower back/ass area with an ominous and audible popping sound whilst picking up ginormous box to load dishwasher with soap. Spend rest of day moaning about my lot in life, sitting my butt on a heating pad and pretending to write.

Monday, 6:30 AM- limp to car, drive to school, take elevator to 2nd floor with kids on crutches. Decline to explain the source of my limp. Cause honestly - I wrenched every ligament in my ass on a box of Cascade? Please. Hope pain killers keep working.

Monday, 9:30 AM - decide during conference period that it will make me feel better to eat part of a Hershey dark chocolate bar. Take half a bite and have chocolate piece wrench the new crown (the one that's fallen out once already since the root canal back in October) pull up and out into my chocolately mouth. Spit crown and chocolate into kleenex and limp to bathroom muttering school inappropriate words. Call dentist. Get appt. for that afternoon. Cancel training session I was supposed to attend.

Monday, 10:30 AM - teach "Ex Basketball Player" by John Updike with empty space in mouth where tooth is supposed to be while tooth resides in a piece of kleenex in my purse.

Monday, 11:30 AM - log on to check my email and discover that Updike has died.

Monday, sometime after the dentist replaces my tooth with hopefully strong cement and some chatter about how excited he is about my soon to be released Dreaming Anastasia while I figure that for us to come out even he'd have to buy like 10,000 copies - go home and reach into make up bag to get lipgloss and slice thumb on uncovered disposable razor. Bleed profusely all over Benefits "Talk to My Agent" gloss tube.

Monday evening - sit without moving on heating pad and watch tv rather than risk disturbing the universe anymore than I already have.

It's the middle of January and I-

Well, I'm all over the place at this moment. Anxiously awaiting the inauguration on Tuesday. I haven't been excited about an inauguration in a very long time. Honestly, if ever. Don't think I'm alone in that. Anxious about some writing stuff, too, but staying closed lipped about that. I try to be one of those people who just cavalierly tells all about current project status but I just can't be that person so I've stopped trying. However, if you have fingers or toes or anything else crossable and I've ever been nice to you or asked about your dog or if you've checked out my picture and said, wow, that is one stellar human; I think I'm going to send her some good mojo in between hoping for world peace and a way out of the financial crisis, then this would be the time.

I grew up in Chicago, so I think a lack of fondness for the winter months is in my DNA. I associate them with cold so intense that your eyeballs freeze up, there's ice on your scarf where's it's covered your mouth and you're pretty sure that by the time the bus comes you'll be frozen stiff on the corner, just a little joysicle some kind soul will have to drag up the steps if they're so inclined which mostly likely they're not. I received my one and only F in college - in ballet!!! which I have no idea why I was taking except certainly I must have partied hearty the night before we signed up for classes the previous fall - because it was almost a full mile walk to Patton Gymnasium and there was too much snow and it was too cold for me to go that far three times a week to put on a leotard and tights and then suffer humiliation because a ballerina I most certainly am not. Yes, there was once a girl stupid enough to sign up for ballet as an extra class even though she still remembered the ignominy of tap class back when she was eight and stupid enough to cut ballet most of a semester and whose transcript from a very fine university now bears the evidence of said stupidity. The February breakup with the rebound boyfriend on the fencing scholarship was only the icing on the stupidity cake that year. But a couple of months later that spring I reconciled with a different guy who is currently downstairs taking a shower so we can drive to Home Depot and maybe stop for waffles. So there ya go. Winter sucks, but spring can give you some nice surprises. One of which has stuck around for a long time, crazy man that he is.

Winter in Houston is a lot less taxing. Summer of course, is the payback. And we lie about summer to our Midwestern friends and relatives just the same way they lie to us about below zero temps. "Not so bad," we say. "We've had worse." And we all roll our eyes.

Anyway, if it's cold where you are, pick up a copy of Judy Blundell's What I Saw and How I Lied, that just won the National Book Award. It is phenomenal. I'm over the moon for this book. YA noir fiction -so beautifully written that you'll linger over sentences, just not wanting to move forward. Evie Spooner is one heck of a narrator; the period details of the late 1940's are so exquisite you feel like you're there and the plot - murder, racism, classism, adultery, love, loss, truth, lies - so gripping it won't let you go anytime soon. This is a genius gem of a novel. Evie wants the truth of what's been happening on her Queen's NY family's sudden trip to Palm Beach, Fla. Or maybe she doesn't. She thinks the fellow she's fallen for loves her back. Or maybe he doesn't. Or shouldn't. Or maybe something else is going on that will crack Evie's world open in ways she never expected. I read the book in just a day or so; and it hasn't let go of me yet.

Email ThisBlogThis!Share to TwitterShare to FacebookShare to Pinterest
Labels: winter; What I Saw and How I Lied

Getting to Know Your Characters

I'm going to post more about this in my inaugural post on our Class of 2k9 Live Journal blog on Tuesday, but I wanted to start mulling things over here first.

So here's the question: How do you get to know your characters? I'm sensing it's different for each writer. And maybe even each book. Anne Michaelson in Dreaming Anastasia (Sourcebooks, Fall '09) began as a voice of this snarky sixteen year old. I'd been poking around for something I really could sustain into a novel. And then there she was, sort of full grown like Athena out of Zeus's head or something.

Only not exactly. The original Anne was simply a sixteen year old girl who seemed to be getting in trouble a lot (that sort of changed) and who knew about the Romanov history and was bored out of her mind in history class. The Anne you'll meet come September when DA hits the shelves, is real, fleshed out person. It's the in between that fascinates me. The trying to track back to how did I really get to know this girl.

Same thing for Andy Meyers in the recently finished Cut Back. And KC Sweet from Sweet Dreams, that I'm itching to get back to when I finish the last of my Dreaming edits. They began as ideas; ended up as people who seem as real to me as friends and family.

So the question is, how did I move from hey I've got this idea about this girl named Anne and this guy named Ethan or this other guy named Andy to people who readers can feel they know? And I guess it's sort of like that old joke about how do you get to Carnegie Hall. (Practice!) It's a sometimes meticulous, sometimes muse inspired, oftentimes messy pages of scribbled notes journey of discovery that ends up with me knowing more than will ever appear on the page but will most certainly inform everything my main characters do and say and think. Meaning that eventually, the question "What would Anne say here? What does she want? Really?" is answerable in a way that is organic to who she is.

More over at the 2k9 blog on Tuesday. See link above and see you there! And feel free to chime in here and there about how you achieve characters that you really really know.

Email ThisBlogThis!Share to TwitterShare to FacebookShare to Pinterest
Labels: Class of 2k9, Knowing your characters 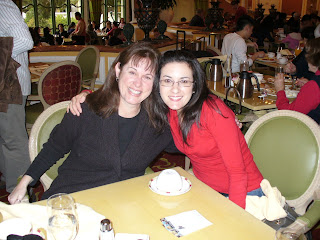 Welcome to 2009! My class of 2k9 - http://www.classof2k9.com/ - certainly wants you to come visit our website and read our books as they come out this year! Some of us are also members of the Debs - another 2009 group bonded together and enjoying this great ride. And wonderful sites like http://mrsvsreviews.blogspot.com/ and http://www.thestorysiren.com/2009/01/09-debut-authors-challenge.html have set up challenges to do the same! Thanks to them and to Little Willow at Slayground for mentioning all of us and supporting us in this most exciting of creative endeavors!!

Had my own moment of exciting squeee over the holiday when it turned out that agent Jen Rofe and I were going to be Vegas at the same time and so we had our very first breakfast meeting! I would tell you about it but you know what they say about Vegas...
Til next time...