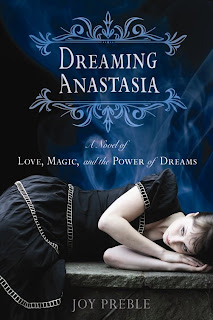 Well, there still may be a few little tweaks coming, but my Sourcebooks publicist has give the okay - particularly since the cover is up on Amazon and Target already and I think Barnes and Noble can't be too far behind - that I can officially share the absolutely magnificently beautiful Dreaming Anastasia cover!! I think that it hits the fantasy elements of the story just right and I couldn't be more excited. ARC's are coming soon, launch date is definitely September, and oh! I'm so thrilled and honored to share Anne, Ethan, and Anastasia's story with you very soon.
Til next time...

In which I am unwound by Neal Shusterman's Unwind

So I'm roving about the classroom yesterday as students work on drafting their research essays. "What do you think?" one guy asks. I read his intro. "It's okay," I tell him. "But just okay. It doesn't grab me, doesn't make me want to read on." And what I'm thinking is, that I'll have to anyway because that's my job. Which doesn't exactly fill me with thoughts of glee. What it mostly makes me think is what I expressed next - in a slightly kinder form than you'll see it here - which is that if there's one thing I want to express to student writers it is that good writing makes readers feel that the writer is so passionately engaged in the task that whether we agree or disagree, whether it pleases us or horrifies us, we feel compelled to read on. We do not sit or stand there thinking, huh! I'm going to have to read this and when I'm done, the only thing that will occur is that I'm 10 minutes closer to death (20 if it's particularly unintelligible and lengthy, which somehow often seem to go together) and I will have spent those minutes on this paper, minutes that I'm never getting back and during which I might have done any number of things more pleasurable, including but not limited to root canal surgery.

Which gets me to something that I've now read four times in a row and will probably read more times because it's so wonderfully and skillfully horrifying that I can't stop reading it, which is the actual unwinding scene near the end of Neal Shusterman's Unwind. If you haven't read it, Shusterman's Unwind is a dystopian YA in a future that is far enough away that iPod's are no longer in use and in which, after a 2nd Civil War over abortion rights called the Heartland War, abortion is outlawed, but parents can legally "unwind" a child during ages 13 - 19. Teenage years. Once the "unwind" orders are signed by mom and dad, there's no going back. You won't be dead - you'll be in a "divided state" - having been completely gutted, taken apart and re-harvested elsewhere. Your kidney to someone with kidney failure. Your arm to someone who's been in an accident. The three main protagonists are Conner, whose rebellious ways have caused his parents to sign the orders - and purchase tickets to the Bahamas for the rest of the family for the day after he's sent off to the Harvest Camp; Risa - a ward of the state who is going to be unwound because she no longers shows sufficient promise as a pianist ( parents, btw, can also "stork" their newborns, which means that they can legally abandon them on someone's doorstep and if they're not caught, then the family who received the baby has to raise it); and Lev - who initially seems happy that his family is "tithing" him at his thirteenth birthday. He's going to Harvest Camp feeling all spiritually moved by his impending sacrifice. Through a series of circumstances, these three are thrown together and the plot twists and turns and scares the pants off you from there.

But back to that scene. I haven't read a scene for awhile that dug in like that and was so starkly scary. This one is. You read it and you know you're in the hands of a master of the craft. And then you read it again.

So if you're reading this, please let me know. What scenes - for whatever reason- have you read that simply won't let you dig them out of your head?

Tyra's going to UT and other dreams come true

If you watch Friday Night Lights (okay, if you are planning to watch FNL, spoilers coming, so either stop reading or read on and live with it), then you know that Tyra Collette, who finally came to believe that "college is possibility" and finally stopped having enough hate in her heart to jump start a car and finally believed dear Landry when he told her that he believed in her no matter who else didn't, got into UT in the season finale. And while that took the teensiest bit of suspension of disbelief for we Texas folk because we know Texas still has the top ten percent rule and that UT's freshman class last year was comprised of over 70% of only top ten percenters and that in the real world, Tyra would probably not only have been wait listed, she'd have had to go to UTSA first for year, it was still a moment that made me cry. As did the moment when big brother Billy Riggins ("fixin' cars and drinkin' beer, what else could you want?") grabs hearthrob Tim Riggins and tells him he's going to college even if it's hard because he needs to set that example for Billy's yet unborn kid that you can do better and you will do better, end of story. And I cried when Lyla finally forgave poor Buddy and admitted that she really did want to go to Vanderbilt. And when Matt Seracen decided to stick by grandma... Guess I've been crying a lot here.

But here's the thing about why Tyra's story really grabs me the most. She is a girl who has been vastly underestimated her entire life. She has been pigeon-holed as the girl from the wrong side of the tracks, dismissed as the girl who could make it but won't. And with some luck and a couple of people who never stop believing in her, she proves those naysayers wrong. She didn't give up in her heart - not ever - even when she could barely stand to keep believing because it was so easy to stop.

And I guess that's how I feel about how crazy wonderful it is to log onto Amazon and see a book for sale with my name on it. I am not from the wrong side of the tracks, but when you go with a whole heart after a dream for so long, it's easier to believe it won't happen than to believe it will. Less risky that way. And you discover that some people find it hard to be generous about other people's dreams, which kind of stings. But like Tyra, you eventually come to the understanding that you're not doing this for other people. You're doing it for yourself, for the story, for the sheer joy of the craft, and for the simple reason that the Muse has given you a gift and it would be a travesty to waste it.

So I guess that's why I've loved FNL and why I loved the indie film Sunshine Cleaning that I saw last week. They're about possibility. About never ever giving up, especially if it feels easier. Success it seems is part hard work, part unexpected gift. It doesn't always happen with the quick ease of a slot machine win, at least it hasn't for me. As agent Jen and I discussed just recently, some people are the slow and steady types. Like Coach Eric Taylor - to leap back to FNL one more time - he isn't about the show and the glitz. Some people fail to see the value of that slow climb. But I'm not one of them. 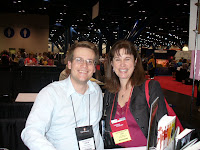 My pal Janet Fox (Faithful, Puffin, 2010) couldn't believe I'd never been to TLA. But 'tis true. I hadn't. So she graciously showed me the ropes this week and I am forever thankful. Because besides getting to see many of our 2k9 books featured in the various publisher's areas and hang out with very cool librarians and amazing authors of all sort - including Janet's friend, author Kathy Whitehead (Art from Her Heart; Looking for Uncle Louie on the Fourth of July) and my friend, author Dede Ducharme (Treasure in the Tiny Blue Tin), and of course the amazing and generous Austin power couple -Cynthia and Greg Leitich Smith (Cynthia's Tantalize sequel, Eternal is out now), I got to see Meg Cabot and Scott Westerfeld up close and personal, which if you're a writer type, let me say is like seeing rock stars. And I got a few minutes of one on one conversation time with John Green! Yes - Paper Towns John Green. Looking for Alaska John Green. The "oh I'm in awe of how amazingly funny you are on paper" John Green. Which is what happens when everyone else goes to the Bluebonnet Luncheon and you stay on the exhibit hall floor and wait until the very end of his signing time.
Til next time.