Well, you all had the contest hat quite stumped! So many thoughtful responses and so much fab fairy tale love. That, coupled w/my celebratory mood in having FINALLY finished my HAUNTED line edits today - has resulted in one winner and two runners up! Yay!! So- drum roll please!

Our two runners up, who will be receiving Dreaming Anastasia and HAUNTED bookmarks, are:

Lynsey Newton - who won my fancy w/ her British spelling of favourite plus her comment about how she loved that in Beauty and the Beast, Belle fell in love w/the beast despite his looks. Way to look beneath the surface, Lynsey.

Jennie Smith - who deserves props for publically fessing up to having stolen Rumplestiltskin from her school library 20 years ago!! And for giving her dad props for doing character voices.

And our grand prize winner, who will receive the signed copy of Dreaming Anastasia, both sets of bookmarks and DA postcards, is :

Jessica - who wrote a delightful thesis on fairy tales - Grimm and others vs. Disney - and who knew that in the original Snow White, the evil queen's punishment is to dance to her death in red hot slippers and in the original Cinderella, the crummy stepsisters try to fit into the glass slipper by cutting off toes and heels of their feet. Serious ick! (Does anyone remember - I think it's the original Sleeping Beauty - the evil queen there gets dragged through the streets after having been stuffed naked into a barrel studded with nails? Seriously - there's some fairy tale that ends that way)

But in any case - YAY!!! Jessica and congrats to Lynsey and Jennie too.

To collect your prizes, please email me at joy at joypreble dot com and let me know your mailing addresses and I will send!

As for HAUNTED, it's headed into copy edits now. Soon it will be in advanced reading copy form. I am profoundly grateful and excited.

Contest is closed, folks. Will pull the winner out of the contest hat soon and announce tomorrow! Stay tuned.

All right, so it took me a week to get this contest posted since I announced I was going to do one. But in defense of my slothful ways, I've been working the HAUNTED line edits so all of you can have an awesome DREAMING ANASTASIA sequel to read in February.

But to the point.
As I mentioned in the previous post, Sourcebooks has done a foreign rights deal and DREAMING ANASTASIA is going to be published in Turkish! In honor of this uber exciting moment, I am doing a giveaway.

First- here's what you will win. Check out the two pictures below. 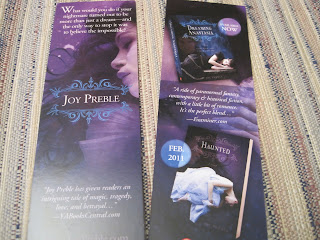 Above are my new HAUNTED bookmarks. They are part of the prize package 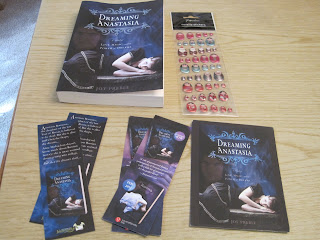 Above is the full prize package. Specifically - a signed copy of DREAMING ANASTASIA, a pack of stick on Russian matroyshka doll stickers (the matroyshka doll plays a big role in DA and (oooh, spoiler alert) continues to be a presence in the sequel and beyond), DA bookmarks, HAUNTED bookmarks, and DA postcards. That's a lot of swag.

And I wanted this latest contest to reflect the fairy tale/folkloric aspect of the DREAMING ANASTASIA trilogy. The witch Baba Yaga, the lacquer box, the matroyshka doll, the story of Vasilisa the Brave, the rusalka (a malevolent Russian mermaid) that's a key character in HAUNTED - all of these come from Russian/Slavic folklore.
So what do you have to do to be in the running for this haul of swagilicious loot?
THE FAIRY TALE/FOLKLORE/FOREIGN RIGHTS/PILE OF SWAG CONTEST
1. Become a follower of this blog.
2.Comment on this post and tell me that you've done this AND -
3. Also tell me your favorite fairy tale/folklore tale and why it's your favorite.
I will put all comment entries in the contest hat and the winner will receive the above swag!
Contest will be open until Wednesday, July 21st at noon CST.
So start your contest engines!
Til next time...

And in exciting news of the week - Dreaming Anastasia is going to be published in Turkish!! Is this awesome or what?

In fact, it's so thrilling that I think it is spurring me on for a contest. I will put on my contest hat and come up with something fitting. And some cool prizes. 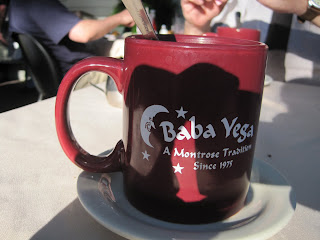 Well, they spell it a little different, but yes! it's the same Baba Yaga from Russian folklore and Dreaming Anastasia.
So if you're looking for a restaurant built in an old house in the Montrose area of Houston - one with a witchy name and decent vegetarian fare plus burgers and a pleasant latte, stop on by. And then you too, can bring home your very own Baba Yega mug! (although you don't have to follow my full example and shamelessly plug your novel by handing the waiter a post card. But if you want to, feel free to pimp me out!)
Til next time...
Posted by Joy Preble at 9:00 AM 1 comment:

Let me preface this post by saying that if you are reading this and are shamefully not a regular reader, you might want to read about the earlier part of the "cancer sucks" journey here.

Well, the radioactive iodine treatment is over now. It's just a matter of getting Mr. Metabolism back to where he needs to be and moving forward from there. As treatments go, this one doesn't totally suck. Okay, the low iodine diet wasn't the most varied thing in the world - when you remove dairy, fish, legumes, iodized salt, food additives, processed baked goods, and soy, and have to limit meat to five ounces a day, there's a bit of a challenge involved. Co-hosted a bridal shower where the only thing I could consume was a fruit skewer, but in the larger spectrum, I didn't need the cupcakes, cheese stuffed tomatoes or chicken salad anyway. Plus alcohol - that was on the okay list. Now, I don't recommend downing that entire bottle of chardonnay without a metabolism, but hey, I already have cancer. Who's going to comment about my excesses?

But the body scans and the RAI 131 pill - not so horribly bad. They scan you, calculate how much radioactive iodine you need to burn out any remaining rogue thyroid cells (in my case, three dots where the thyroid used to be connected to me), stick you in a little room, bring you the pill in a huge safety bottle. Then the nurse double gloved, gave me a glove, let the pill out of the bottle, shoved it in my gloved hand and yelled at me to swallow fast. She whipped out a yard stick, backed up the three feet, and - seriously - clicked on the geiger counter to check my uptake. Then she got the hell out of Dodge, leaving me to the Cash Cab marathon on Discovery, my two gigantic cups of water I needed to drink and a blanket. There was a brief brouhaha when I asked for magazines and was thrown The Economist and Texas Highways. "Seriously?" I asked the nurse. "You looked at me and this is what you thought I'd like? I must look shittier than I thought." A few minutes later, I was tossed Star and Entertainment Weekly. At least we had established that if I had to spend two hours cooking in radioactivity and peeing it out (remembering to flush twice each time) I would be better served by Snookie and RPatz gossip than by an article on the failing housing market or RV tips for that trip through Big Bend.

Eventually, they kicked me to the curb, which required riding home in the back seat on the passenger side of the Altima (which we'd brought instead of the Pruis, in the foolish hopes that somehow this would solve the "stay six feet away from her" issue.) The extra reminders not to swap spit or other bodily fluids were a bit easier to manage. (are there really people out there jonesing to get busy with their radioactive wives? Not in this house)

Luckily, I'd had a brilliant surgical team back in March. So I really didn't have to stay isolated for too long; 36 hours later I was reintegrated fully into the herd. At 24 hours I got back my lattes. Husband placed the tall non fat chai latte on the stair case; I scurried down like a semi-radioactive rat and grabbed it and went back to my lair on the second floor. I think I licked the lid it was that damn good.

And now here I am - back on the Synthroid, able to zip about like regular old me again. Okay, I wasn't thrilled about the sudden five pound weight gain, but it's starting to whittle off as meds build in my system. I'm writing and hanging out and kicking the Bravo channel addiction I developed as best I can. What can I say? Bethenny Getting Married? is damn fine television. Episode three where only a handful of people come to her book signing at Costco? Brilliant stuff.

Beyond that - it's the usual, dear readers. Waiting on round two of HAUNTED revisions. Hoping to see that ARC by August. I am soooo excited! Working on some other super secrety kind of stuff. Maybe some of it will pan out and I can talk about it. Maybe not. But that's the journey, isn't it?

As for me - today's our anniversary. I am one thankful girl that I can spend the day writing and blogging and possibly even going to Super Walmart and then go out to dinner with the guy who's hung in there with me through all this - certainly not something he probably thought he'd be doing when we were having our first date back in college - bowling and ice cream. Yes, I know. Oh. So. Sweet.

So it's on that note that I will end this. Here's your question for today: If you've got a significant other in your life right now, what was your first date? I would love to hear.