1. My trip later this week to Portland, OR for Book Fan Friday at Powell's, where we will talk about fairy tales in YA and do some writing and then to Annie Bloom's on 1/12 for the Time Travel Troika with authors Emily Whitman and Ruth Feldman, moderated by author Rosanne Parry. Plus it's Portland. The Pacific Northwest. Love it.

2. The WHO DONE IT mystery anthology from Soho Press in February. All proceeds go to 826nyc. I am the least famous person in this book, but that makes it even better.  Plus the cover rocks.

3. THE SWEET DEAD LIFE, on May 14th, also from Soho Press. I'm beyond excited for you guys to read this book. Unlikely guardian angels. Breakfast tacos. Broken families. A mystery. Some bad guys. Cowboy boots. Bad habits. A Mercury Grand Marquis. Kissing. Plus a sequel in 2014 that I need to finish this year, too!

4. Some travel: Austin and NYC and LA and maybe Chicago and definitely a bunch of Texas. SCBWI conferences and possibly BEA or ALA or maybe both. School visits. And in November: Austin Comic Con! Yes, I am already looking forward. You can blame that on our Comic Con evil mastermind, PJ Hoover, whose new book SOLSTICE comes out in June, another thing to look forward to in 2013. Maybe we'll sneak a vacation in there somewhere. Then again, I need a new bathroom. Which might happen in 2013, too.

5. The many, many books I will read. Currently on the Kindle, here's what's lined up: Warm Bodies; My Life in Heavy Metal and Plan B: A Novel. And of course YA novels of every type and stripe.

6. The new season of Covert Affairs, which won't start til June, but will be awesome, I know. Augie and Annie. That's all I'm saying. Also, I will catch up with Season 2 of Homeland, follow Season 3 of Downton Abbey and let's not even mention my Bravo addiction or the new eps of Vampire Diaries and Grimm and...  Episodic TV is my storytelling haven. What can I say.

7. And a million trillion other wonderful unknowns that will occur the way they do. There will be book ideas and starts and stops and crazy times with friends and colleagues and the good and bad and occasionally ugly of life. I will write and have adventures and hug my family. 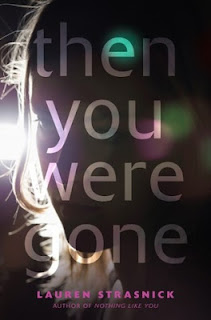 8. But it will all start tomorrow, when I interview friend and author LAUREN STRASNICK here on the blog and she gives away a signed copy of her new book THEN YOU WERE GONE.

So stay tuned. Come back tomorrow.
And even though it's a week late: HAPPY NEW YEAR!!
Posted by Joy Preble at 10:13 AM