THE A WORD COVER REVEAL: THANK YOU SOHO PRESS!!

So last week I got to show you the gorgeous redone cover for paperback edition of THE SWEET DEAD LIFE, which is coming in February, 2014. I had loved the hard copy cover, but for the pb, my delightful publisher, Soho Press, came up with a new concept that even more fully captures the tone of the novel, of narrator Jenna's sassy, mouthy Texas girl voice as well as hinting at the angels that populate the book. Love! (more in a future post about the series and where it's headed and what people are saying!)

And now today I get to reveal the cover for THE A WORD, which is the sequel to TSDL, and which arrives on May 13, 2014, exactly a year since the TSDL release! I am so thrilled with this cover!!! It is gorgeous and perfect and I owe more huge thanks to publisher Bronwen Hruska and her merry band at Soho Press. 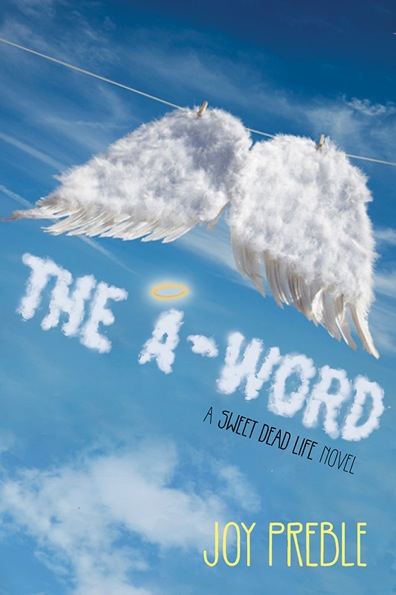 See what I mean! LOVE!
And you can see here, with the two side by side that, they are really meant to go together on a shelf! 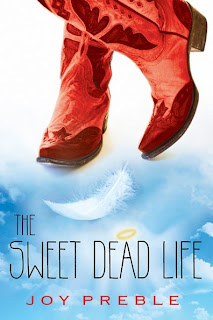 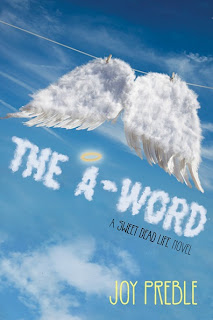 ARCs are coming soon, but for now I can tell you this about where the series is going with THE A WORD: (slight spoiler if you haven't read TSDL, but it does not ruin the central mystery):

Jenna Samuels is about to turn fifteen. It's been almost a year since her stoner brother, Casey, bit the dust. Almost a year since he returned as her guardian angel, along with his "angel boss," Amber Velasco, the hot twenty-something former EMT. Almost a year since Casey and Amber used up their one-time-only angel power of flight to save Jenna from the evil Dr. Renfroe, swooping down to catch her as she tumbled off the balcony at the Houston Galleria. In short, a lot of A-word shenanigans and a mostly happy ending.Except now Casey's begun to wonder why he's still hanging around—not that he minds protecting Jenna. She's a handful, but there's got to be a bigger picture, right? Something to distract him from his on again/off again, doomed relationship with cheerleader Lanie Phelps, who has no idea her boyfriend is, well, dead. After all, he can't use his angel wings anymore. Neither can Amber. Enter Bo Shivers, Amber's "angel boss"—a mysterious A-word guy Jenna and Casey didn't even know existed. Whiskey-guzzling. Handsome in a grizzled way. Unpredictable. Okay, make that crazy. Bo lost his angel wings in an earthly flight a long, long, long time back—and he's been a thorn in Angel Management's side ever since. But Bo knows something is coming. Something big. Something that was worth forfeiting wings for Jenna... something that might just change everything for everyone.