Back to the Windy City 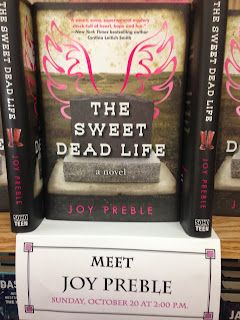 Went home last weekend--visiting Chicago family and also fortunate enough to sign THE SWEET DEAD LIFE at Anderson's in Naperville. It's a funny thing about me and Naperville, IL: my first teaching job after Northwestern was in that suburb (English, comp., and also I was the worst volleyball coach ever, which I can admit now even though my JV team won most of their games), and then some years down the road, my first novel, DREAMING ANASTASIA was published by Sourcebooks whose headquarters is in, yup, Naperville. And so here I was again, last Sunday, honored to appear at Anderson's, which is an amazing indie and was kind enough to invite me to sign.

Let me interject that I'm catching up on Vampire Diaries as I type this and I'm a tad tired of evil, angsty, troubled Stefan. And now… vampire amnesia. Oh Stefan. I am never tired of Damon. Like not ever. And I haven't caught up with The Originals yet, but eventually I will. Unless you think it's not worth my effort. Anyone?

It was a good Chicago trip: cold enough for me to feel like a got a dose of actual fall and filled with family and food and wonderful friends and fans who came out to Anderson's and made me feel awesome while we talked Texas angels Jenna and Casey and what's to come with next year's THE A-WORD. I love that this series has a different take on angels. I love that my angels are grumpy and angsty and imperfect and something more than just vampire substitutes. And that many of the humans in the story have no clue that they're interacting with heavenly beings. And that at its core it's story of family as much as it's a mystery and a growing love story. Plus there was Lake Michigan!

Here are some pics: