Today Cathleen lets us see the covers that didn't make the cut and explains her thought process behind each one. I seriously had NO IDEA about how this works. I had, however, seen a couple of these, but not all of them. So here we go:

Here are some variations I presented for Dreaming Anastasia. It helps illustrate the strategy of what I hand in and sheds light on how a final cover is selected. In this comp you can see my attempts at turning a dark story into a bright whimsical cover. Now, even though this is a colorful solution for a dark tale, it could hit the target with the marketer, who may not want a dark cover. Understandably, they tend to want things that “pop” off the shelf and catch your eye. It also at the same time stays true to the story, as the nesting doll plays an important role as a protective force for Anastasia. It also alludes to the tragedy as all the other Romanovs fell in the execution except Anastasia. Some believe due to some form of magic. This is represented by the smallest doll still in the center and protected, while all the others tumble around her. This cover was a metaphorical solution for me. 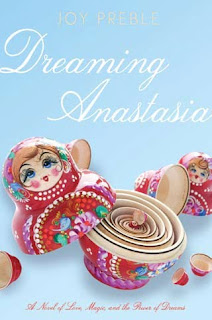 Here is my literal cover for the story showing Baba Yaga’s hut in the woods, with the fire that burns as Anastasia sits next to the burning fireplace holding her protective nesting doll. Anne is described as being very thin. I also chose this girl for her skirt that looks like a tutu, since she is a dancer. The girl has curly hair like Anastasia is described having. Is it Anne or is it Anastasia? In the story, the lines between the two girls is blurred. Anne starts to feel what Anastasia feels and feels compelled to save her. The dark elements are represented by the trees and hut. While the type takes a somewhat romantic bend. So, here I tried to show many parts of the story
literally. Note: this cover is made up of 5 photographs. The girl, the doll, the cabin, the tree and sky are part of the same image, and the flame (which is actually a picture of a lit match). 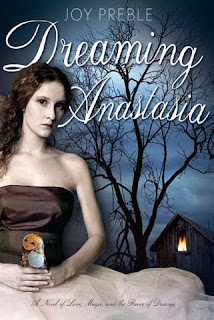 I created this one in case the marketers wanted to position this book as a romance. I gave it a general “dreamy feeling” and the butterfly represents the nature that is described in many scenes. Note: This is a low-resolution sketch. The woman is actually patched together. The neck and face are one image, while the hand, butterfly and dress are another. 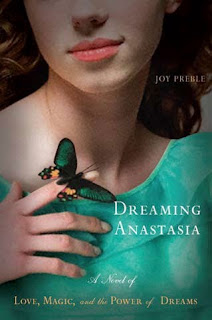 This one was a response to the darkness and mystery in the story. Baba Yaga’s dark hands reach out and grab things. Or her mouth opens so wide she swallows you! Ohhhhh scary... The roses were a hint at the romance, but still treated in a vintage way. “A novel” in italic over her mouth is meant to suggest whispers from Anastasia from the past, or at least that’s what I was thinking when I placed it there. I felt like this was Anastasia looking through the smoky widows from the cabin where Baba Yaga held her captive. 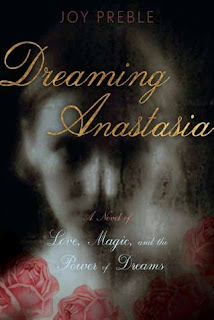 In this one I focused on the fantasy. The forest became a set of graphically drawn branches that I hoped would be spot varnished on the final cover. The shadow however would be printed on the boy’s face in the background. Again this type is romantic. I drew extra flourishes coming out of the type to integrate it with the drawn “forest”. There is a mystery to how Anne is treated. Her look suggests she is “going somewhere” or “has something to do.” Ethan in the background with ice blue eyes, suggests his interest in her and his supernatural aspect. Considering he is at least a hundred years old! I felt this one had darkness, mystery, romance and spoke to the story being a fantasy. This is the cover they went with. It has an obvious bend toward fantasy. Also, the girl in the selected design has a modern look but has on a dress that looks vintage. The Romanovs were concerned with wearing too flashy of clothes. So, I thought this dress was perfect for the period and also was true to the story. It has a romantic and historical feel. The smoke in the background is from the lit match idea I used in the hut earlier. Now that I was working on this design I chose to just use the smoke from the flame not the actual flame. I thought it made sense, looking like she had passed out and was starting to dream. Smoke being the symbolic reference of her traveling to the woods. Hinting at something mystical or magical happening. Ethan is changed to a photo of a different guy, but his ice blue eye remains the same suggestion of him being a supernatural being. I like this one a lot because Anne looks very pensive and dreamy. She was also known to pass out and wake in the woods. The stone slab was the perfect reference to the woods. The last cover I handed in as the “selected” design. 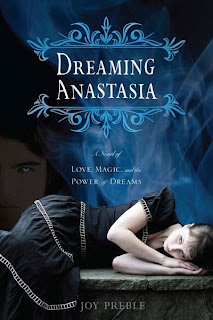 All that said, I have to mention that in my design education I was taught that everything is put on the page for a reason. I was taught to remove anything that was meaningless. Now, when someone looks at a cover I have done, they shouldn’t necessarily be aware of my every thought. It should just speak to them. Even if they don’t know why.

When I hand in work, I try not to ever call the Art Director and explain myself. I feel like if the design doesn’t speak without me talking, then it has failed! Let’s face it, this needs to sit on a shelf without me. I can’t stand in Barnes and Noble and give a long winded explanation to everyone who picks it up!!! As an Art Director, I didn’t allow designers to speak to me about their work until I was able to look at it myself. Alone, and not aware of their thought process. I wasn’t trying to be mean! I was just trying not to be colored by their words. Designs need to speak and I needed a clear view.
Wow Cathleen! Like I said, I had no idea of the artist's thought process. What is most amazing and humbling to me is that Cathleen has to really "get" my work in order to do the covers. How thrilling is that?? Trust me, very thrilling indeed!
Tomorrow we will get to see what you've all been waiting for - the real Ethan and then..... the HAUNTED cover. Whoot!!
Stay tuned.
Til next time...
Posted by Joy Preble at 5:51 PM

That is most intriguing. I love your cover!

Fascinating posts! I loved all of Cathleen's work. It must have been a hard choice for the publisher. I can't wait to see the next installments.

i enjoyed reading these two interviews with your illustrator. good stuff. thanks for sharing.

How cool! I loved seeing all the different cover ideas!

Ooooo I so know the Girl on the cover for reals!