Chicago Snow Memories: Or The Mouse that Froze 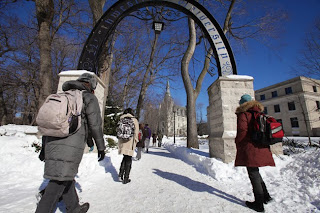 It's the first Friday of January, and if you're somewhere snowy and cold, I hope you're warm and dry and bundled up. Here in Houston it's in the 20's which for us is frigid, but it never lasts that long--usually. In Chicago where I grew up, it's snowing and snowing and then the ice will set in when it drops below freezing next week. My last winters in Chicago were like that-- endless snow, feet of snow, and then sub-arctic temps that freeze your eyeballs.

Chicago weather makes you tough. It was once so cold while I was walking to class at Northwestern that when I made the half mile or so, there were tiny icicles on my scarf where it had covered my mouth. Yes, the moisture of my breath had formed ice! On Lake Michigan, I saw waves freeze in mid-motion close to the shore.

Once I walked outside too soon after sucking on a menthol cough drop and my lungs seized up momentarily.

And then there was an endlessly cold winter my junior year at NU and all the houses in the sorority quad got a mouse problem because hey,  they needed somewhere warm and the interconnected houses were perfect. We put out these sticky traps that didn't work mostly…. Grossed out one morning to find an unfortunate and chilly rodent stuck to the yellow paper, I tossed it outside in the blizzard where he froze to death soon after. Mousicle. A cautionary tale for his comrades.

Stay warm, dear readers.
Posted by Joy Preble at 8:07 AM

I've heard it's colder in the Windy City right now than it is in Siberia. Wow. Everything here shuts down with a few cm of snow. Literally.

kind of nutty, I know!