The Water Wars: Chatting it up with Cameron Stracher

I first met Cameron Stracher in New York at the Sourcebooks Fire Launch Party. Correction: I first met him at the dinner the night before. But as you can see in the picture below, it was a crazy big table. I was at one end and Cam's the guy to the left of the candles. But eventually we got to chat - and laugh. When he's not writing books, the delightful Mr. Stracher is an entertainment lawyer, so he definitely has some stories to tell. (not that's he's told me any. And I will swear to that in court) 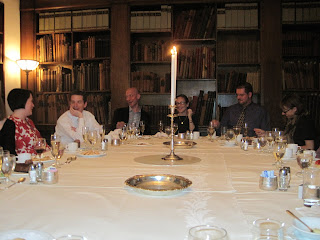 Here's the official author photo, below. 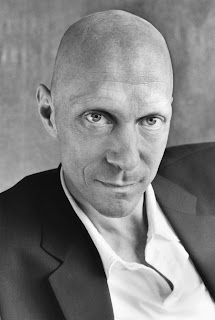 And here's the book cover for his debut YA dystopian novel - The Water Wars.

The official product description goes like this:
Would you risk everything for someone you just met?

What if he had a secret worth killing for?

Welcome to a future where water is more precious than oil or gold...

Hundreds of millions of people have already died, and millions more will soon fall-victims of disease, hunger, and dehydration. It is a time of drought and war. The rivers have dried up, the polar caps have melted, and drinkable water is now in the hands of the powerful few. There are fines for wasting it and prison sentences for exceeding the quotas.

But Kai didn't seem to care about any of this. He stood in the open road drinking water from a plastic cup, then spilled the remaining drops into the dirt. He didn't go to school, and he traveled with armed guards. Kai claimed he knew a secret-something the government is keeping from us...

And then he was gone. Vanished in the middle of the night. Was he kidnapped? Did he flee? Is he alive or dead? There are no clues, only questions. And no one can guess the lengths to which they will go to keep him silent. We have to find him-and the truth-before it is too late for all of us.
Water Wars just released from Sourcebooks Fire on 1/1 and I can hardly wait to dig in. In honor of that, Cameron and I sat down computer to computer for a little interview. Here's what he had to say to the questions I asked. And btw, he never once pleaded the fifth!

1. Tell us a little about Water Wars and the inspiration behind writing it.

I wanted to write a thrilling adventure story for my son who was 12 at the time, but was reading sophisticated books like To Kill a Mockingbird, The Road, and the Golden Compass. I've always enjoyed near-future novels, where present day problems are manifested in some strange / interesting / frightening way. And, of course, one of our biggest current problems that most people are ignoring is water shortages.
2. If Water Wars was to be made into a movie, who would be your dream cast?

3. Why dystopia for your first foray into YA novels? Is this a favorite genre?

Yes. As I said above, I've always loved near-future novels -- Blade Runner is a favorite. I love most everything by William Gibson. I was a big science fiction fan as a kid -- Dune, lots of book by Isaac Asimov, Arthur C. Clarke, etc.

4. Which of your characters would your teenage self most relate to? Why?

Good question! I would want to kiss Vera.

5. I very much enjoyed your "Dinner with Dad" which chronicles your year of trying to find personal balance through cooking dinner for your family most nights. Are you still cooking? Are your kids still fans of macaroni and cheese? :)

Thank you! Fortunately, my kids have moved beyond macaroni and cheese. A big favorite now is gnocchi. Also, I make a mean homemade pizza -- or I did until our oven broke down (we're waiting for a replacement). Both my kids love my egg rolls, and my wife makes a great shrimp fried rice. I'm not cooking as much as before (I have to work unfortunately), but we're definitely eating better.


6. What about balance these days? How do you manage to write, practice law, parent, husband, run, and live the rest of your life? (because if you have a secret, let me know. Cause I'm finding that I'm sleeping less and less these days trying to keep up)

Less sleep, and lots of coffee! I write in the mornings and the evenings during my commute. I have 75 minutes each way on the train where I'm usually not interrupted and can get a lot done. The rest of my day is usually spent practicing law. If I can, I'll sneak out at lunch for an hour to run. Mostly, I do my running on the weekends.

6. One of the first things I learned about you when we met in person in NYC was that you’re a runner. Why running?

Hard to say. I was not particularly athletic as a kid, but we ran the 800 meter in gym class in 8th grade and I won, and I guess I was hooked ever since. My best (fastest) days are behind me, but I still try to run as much as possible. I'm writing a non-fiction book about the running boom and the 1970s, and it's fun to re-live those days in my own mind.

7. In case readers are not aware, you have a fairly glamorous day job as an entertainment lawyer. What's the coolest thing that's happened since you began repping the rich and famous and tabloid-worthy?

I love my day job, but I do spend a lot of time responding to angry letters from lawyers for celebrities like Tom Cruise and Britney Spears. I think what's coolest about it is that I know the gossip before my 11 year old daughter, and so she doesn't think I'm a complete loser.

8. What advice would you give aspiring writers?

Read, read, read. It's amazing (and sad) how many people want to write but don't read enough so don't have models on which to base their writing. You should read and think about what makes a certain story / character, etc., work, then try to copy it in your own writing. Eventually, you will develop your own "voice," but first, I think, you have to learn the basics.

9. What books are on your nightstand/downloaded to your ereader?

I share my kindle account with my daughter, so I have all 8 books in The Pretty Little Liars series, and I'm almost done with the first. I also just read Born to Run, which a lot of people have recommended to me, although I didn't love it. I also just re-read a book that might be considered dystopian fiction from the 1950s -- On The Beach. It's about what happens to the world after a nuclear war when the only survivors live in the southern hemisphere and the radiation is gradually spreading southward.

10. What's next for Cameron Stracher?

I have to finish my running book, as I mentioned above, and I'd love to write a sequel to The Water Wars. I also have another YA project I'm working on called "91," but I'm keeping the topic of it a secret for now!
Thanks, Cameron, for such a great interview!

Hi :)
Thank you for the interview with Cameron Stracher & thank you to Cameron for sharing here. It was interesting to learn about the author behind Water Wars.
All the best,
RKCharron

This book sounds right up my alley. Thanks for the interview!

Wow the cover alone is breathtaking but that synopsis makes me want to dig in as well!

I just fell across your blog while searching online at my favorite bookshop (Blue Willow). So glad I did too, I see you have two books and I have to see what they are as well!!

Thanks for the fabulous interview!

Jen - I had no idea that Blue Willow had been so kind as to link me as a "friend of Blue Willow" So thatnks for letting me know! It is my favorite store, too; I just wish I lived closer. I will be appearing at the Houston Teen Book Con that they help sponsor, btw, on 4/9. Very excited about that! Enjoy Water Wars.