One of the best things about being an author is getting to hang out with other authors and readers and bloggers and librarians at book festivals like last weekend's Montgomery County Book Festival, right here in The Woodlands, Texas.

I have a tender spot for this festival: it was the first 'big' festival to which I was invited to appear in January of 2010, a few months after DREAMING ANASTASIA came out in September '09. I was thrilled! And sharing the stage with Melissa Marr and Sarah Zarr and Cassandra Clare, among others. Crazy wonderful! Of course what I never anticipated is that the morning before that Friday author dinner on that January day in 2010, I would have had a neck biopsy that would confirm that I had thyroid cancer. Let us just say that my 'most exciting moment' became a 'deer in the headlight' moment, at least in my head. In public I was smiling. Inside my head, I was freaking. In the end, it turned out okay: surgery, treatment, meds, and now a patient for life because once you go down that road, that's what you have to do even if they say you're cured. They want to be sure it sticks. But it left me with the clear understanding that life can give you the great and the sucky all in one day. I had known this, but after that I KNEW IT in a different and deeper sense.

Which is all to say that I had the best time last weekend -- having fun, meeting new authors, not worrying about biopsies. It was grand. I shared the THINGS THAT GO BUMP IN THE NIGHT with    wonderful moderator  Jen Bigheart and amazing authors Lisa McMann, Kendare Blake, Mary Lindsey, and newcomer Victoria Scott, who is going to blow you all away with her debut series THE COLLECTOR and its bad boy Dante Walker this spring! I talked to amazing readers. I laughed and ate good food and yeah, there were some adult beverages involved. It was perfect and I am thankful for the hard work of librarians Tabatha Perry and Natasha Benway and everyone else who made this HUGE event with 40 authors go so smoothly, including McKenna and John and the Murder by the Book gang who ran the bookstore and even finagled Random House into sending at early shipment of this: 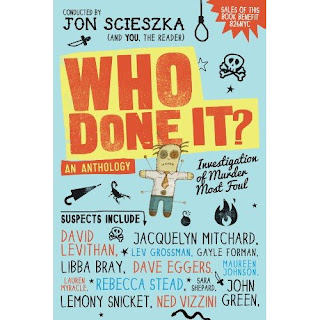 This is the WHO DONE IT anthology that will be out on 2/12!! Here is how it looked at the MCBF13 bookstore: 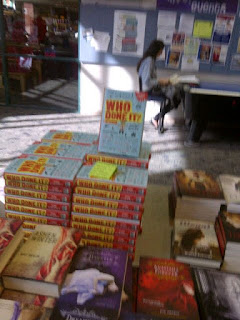 I'll be signing copies and reading from WDI on 2/23 at 4:30 at Murder by the Book in Houston. More on that on Tuesday 2/12 when it officially launches!

As for the rest of the festival, here's some of went on:

"one of the best things about being an author is getting to hang out with other authors and readers and bloggers and librarians at book festivals..."

*growls with jealousy and vows to someday make it into the club* ;)