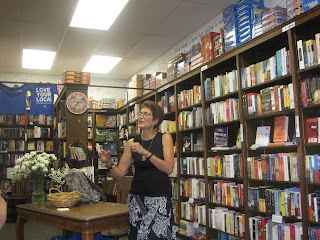 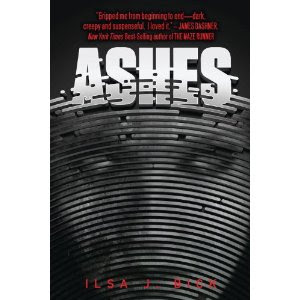 Got to meet the fabulously talented Ilsa J. (for Joy!) Bick last night at Blue Willow Books, as she tours with the first of her YA post-apocalyptic trilogy, ASHES.
This won't be a full book review because I'm only half way through, but I haven't been able to put the book down, which says a lot! ASHES tells the story of Alex - orphaned when her doctor mom and cop dad are both killed in the same helicopter crash, then devastated by a brain tumor diagnosis. "The monster" as Alex calls it is untreatable and inoperable and killing her. It has already taken her sense of smell and thus many of her memories - so much is triggered by smell - with it. She decides to call the shots. She'll go camping in the Upper Peninsula of Michigan (she's a skilled and frequent camper) alone. Maybe she'll come back. Maybe she won't. She is a tough and brilliant girl, Bick's Alex. And then the EMP hits. Electromagnetic pulse. Possibly more than one. Possibly on purpose - a type of warfare. And the world as everyone knows it is duly destroyed.
No one is the same after the EMP - not people, not animals... but not all in the same way and not all at once. The changes are strange and horrific. Let's just say that if you're very young or very old, you've got it good. Any from puberty to oh, 65 - well, not so much. And a bunch of teenagers take on some, well, not so pleasant eating habits. Not exactly zombies. Not exactly not.
And then there's Tom, the soldier who home from deployment in Afghanistan...
Tonight Bick -- a former soldier and a child psychiatrist who's worked in prisons and is also the daughter of a Holocaust survivor -- told us that she wanted to explore both the worst and the best in human behavior. Placing her story in the context of world destruction definitel amps up the possibilities. What do people do/how do they behave when their own survival is on the line? I agree with Bick that we never know until it happens to us. (this is something I've talked about extensively in classroom settings when teaching works such as Elie Wiesel's Night.)
ASHES is a gory but fascinating read so far. It's pulling hard on me this week, which is impressive since I have to finish my draft of THE SWEET DEAD LIFE before editor Leah sends me my edits for AGAIN and AGAIN and it's crazy time here in the writing cave.
Check out ASHES by Ilsa J. Bick -- who is also a delightfully smart woman who can talk about everything from Star Trek to film to literary tropes to Freudian analysis and Wisconsin history, including but not limited to the German POW camps in the US during WWII!
Posted by Joy Preble at 5:00 AM

Now you've got me all excited to read this! Thank you so much for sharing your thoughts!