THE ONE WITHOUT THE ANIMATED BAT: WHY YOU NEED TO READ THE DREAMING ANASTASIA SERIES 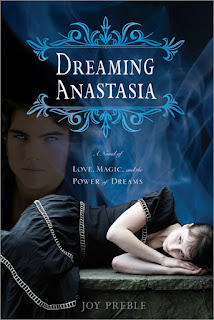 I like to think of my first book -- and eventually first series, DREAMING ANASTASIA (Sourcebooks)--as the 'little book that could.'

In many ways, back in September, 2009, it was ahead of the curve: Like so many series and books that came after it and very much like Marissa Meyer's CINDER and SCARLET and the rest of the forthcoming LUNAR CHRONICLE series, it reimagines a set of fairy tales, in this case the Russian stories of Baba Yaga the witch, Vasilisa the Brave, the doomed rusalka and the immortal guy of soul jar trope fame, Koschei the Deathless. It does so within the context of a modern day girl named Anne whose life and journey in many-- but not all-- ways parallels Anastasia Romanov's and the hapless hero Ethan who begins the series with a temporary case of immortality.

Or as recent reviewer Jason Gallaher, writing at YABooksCentral about the series, says: IT'S THE ONE WITHOUT THE ANIMATED BAT!

I'm good with that. It is the one without the bat. And it is -- like CINDER, which I recently read and adored,  in case you're wondering what's sparking this discussion--an ambitious and often complex series in its attempts to meld three different sets of fairy tales characters that were previously unconnected, with a historical family that met great tragedy. There is the central mystery of Anastasia, but there are also interconnected mysteries of Anne's family and the rusalka's family and Ethan's family and Viktor's family and the witch Baba Yaga's backstory and Anne's own hero's journey. Plus a romance with Ethan! Which is a lot. And (yup, like CINDER, where Cinder and Kai both narrate), there are alternating points of view, in this case in 1st person. So the stories unwind and twist and turn.

And oh yeah, did I ever mention that the whole series was largely influenced by my story telling hero, Joss Whedon? That Buffy and Angel and the reverse fairy tale concept -- because yeah, Anne is the strong one in this series and Ethan falls for the bad guy's tricks way too often even though he is a blue-eyed handsome hottie with bangs falling over his eyes-- all that was a HUGE influence on my first series. That Whedonesque mixture of humor and angst -- that's what I wanted to bring you. And it was a labor of love.

Lately my focus has been on THE SWEET DEAD LIFE, just out now on May 14th from Soho Press.

And while many, many thousands of readers have read DREAMING ANASTASIA (for which I humbly THANK YOU)m  I'd like to try an experiment, but I need you, gentle reader!

I would love to get a new group of readers to discover DREAMING ANASTASIA, HAUNTED, and ANASTASIA FOREVER (all from Sourcebooks)

I would love you to spread the word. How will I know? My Amazon numbers will tell me, among other clues.

And just to help you along, my other wonderful publisher SOURCEBOOKS and the lovely folks at Amazon are offering the e-book of DREAMING ANASTASIA as a Kid's Kindle Deal for only $1.99 from today 6/13 - 6/23! Plus, HAUNTED and ANASTASIA FOREVER kindle e-books are only $2.99. Yes, you can read the ENTIRE 3 book series for under ten bucks! Just CLICK HERE !

So spread the word. Try something new. If the Amazon numbers roll enough that I know you're buying-- and hopefully reading-- I will do a series of AMAZING GIVEAWAYS!! You really want this to happen. Trust me!

Russian Fairy Tales. The Romanov Tragedy. A love story. A kick-ass girl hero and a hapless boy hero who's been around long enough to know better, but he never does. A bad guy with many secrets. The wholesale destruction of many iconic Chicago landmarks. Plus kissing! And Chicago style pizza. And even some ballet. And more kissing.

But NO ANIMATED BAT.

Under 10 bucks for the WHOLE THING.

Go back up there to the link. JUST DO IT.
HERE

Yes guys, take my word for it, READ THIS FRICKING THING NOW!!! Ms P, you just reminded me how much I adore Ethan. He's so sweet! And yeah, mate he should kinda know better by now... And maybe Anne is stronger than him... And maybe he sorta needs a haircut... And maybe he's a stalker... But it all makes him even more endearing!!! READ IT!! You will not be sorry :)